Summary:
As promised in our 2018 Mid-Year Law Enforcement Legal Review, Genesis is pleased to release its 2018 Full-Year Review.

This article provides a summary of the Washington Posts’ updated fatal police shootings statistics, including those involving people with mental illness. It also provides a discussion on qualified immunity along with a representative sampling of settlements and verdicts which occurred in 2018 as reported by the media. It’s important to note that the final disposition of these matters may differ from the published news reports based on post-trial legal proceedings and/or subsequent negotiated settlements.

The Genesis Public Entity team continues to monitor use of force statistics, settlements and verdicts, as well as any additional legislation that may impact our clients.

Settlement and Verdict Values of Sexual Abuse and Molestation Claims 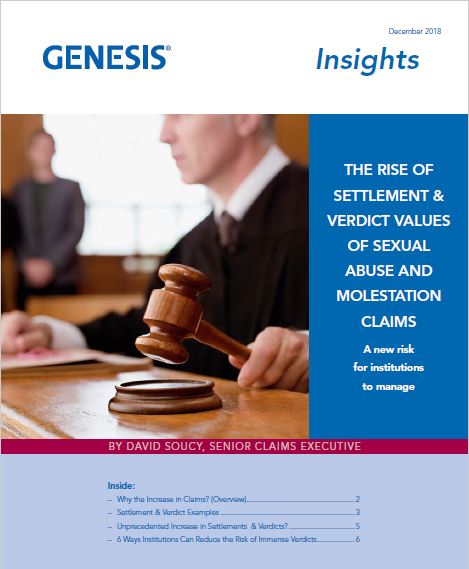 Summary:
Recent abuse cases in the news have paved the way for public awareness and outrage of sexual abuse. With that has come an unprecedented increase in verdicts and settlements. This publication is a current day analysis of the sexual abuse and molestation exposure for public institutions. We explore "Why the increase in claims?" and look at some verdicts and settlements over the past 15 months.

More importantly, we provide 6 ways that institutions can reduce the risk of immense verdicts. 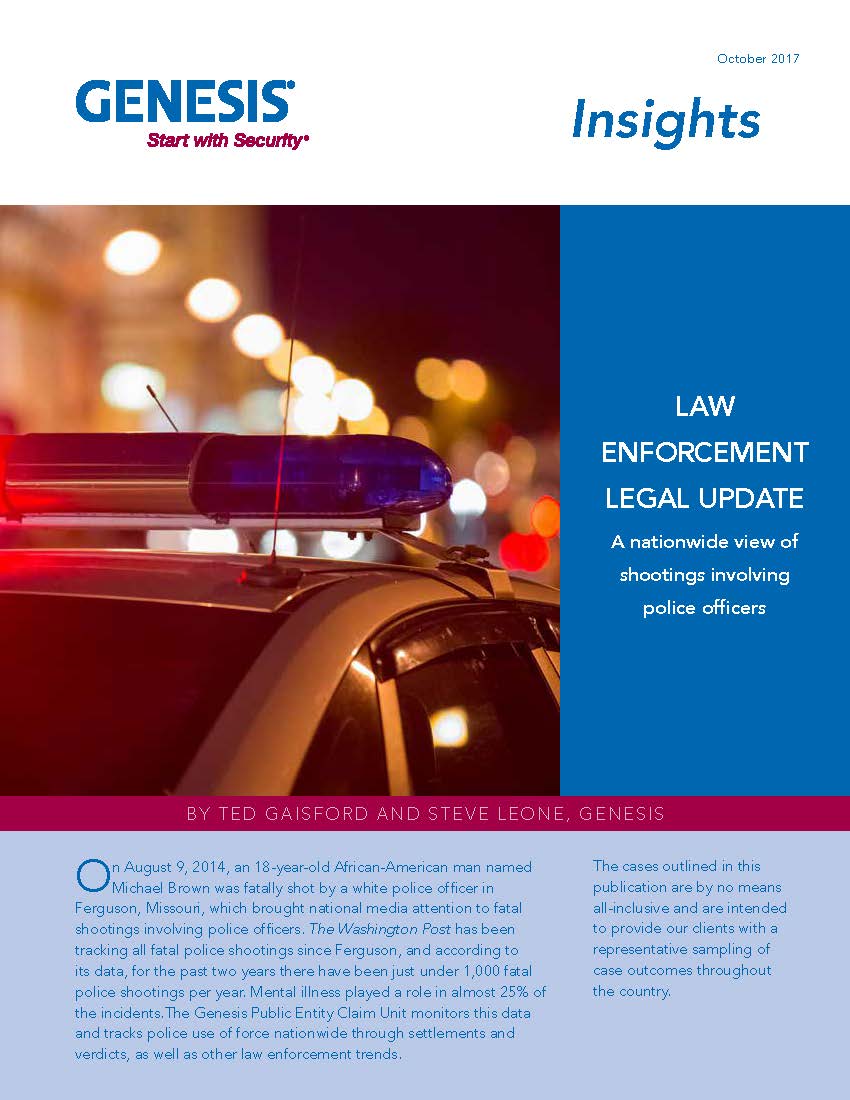 Summary:
On August 9, 2014, an 18-year-old African-American man named Michael Brown was fatally shot by a white police officer in Ferguson, Missouri, which brought national media attention to fatal shootings involving police officers. The Washington Post has been tracking all fatal police shootings since Ferguson, and according to its data, for the past two years there have been just under 1,000 fatal police shootings per year. Mental illness played a role in almost 25% of the incidents.The Genesis Public Entity Claim Unit monitors this data and tracks police use of force nationwide through settlements and verdicts, as well as other law enforcement trends.

The cases outlined in this publication are by no means all-inclusive and are intended to provide our clients with a representative sampling of case outcomes throughout the country.

Summary:
The FAA will soon release new rules to the Federal Aviation Regulations Handbook related to small-sized unmanned aircraft systems (UAS),commonly known as drones, that weigh less than 55 pounds and are used by non-hobbyists. While the regulation is geared toward commercial use, it will affect public entities as well as both public and private educational institutions. The regulation is called Part 107 and will take effect August 29, 2016. All current requirements are in effect until then.

Summary:
Sports concussions have received quite a bit of press lately, as a result of high-profile lawsuits against the NCAA and the NFL.   Medical advances in our understanding about brain injuries are raising awareness and concern about concussions, particularly in the young.

This Genesis Insights article employs a Q&A format to sort through the science as well as the existing and emerging liability landscape.  We also provide some suggestions for schools and other public entities to  consider in managing this growing risk.

The Genesis WC Toolbox claim management tools were constructed to promote purposeful thought, critical thinking and fact based, not intuition based, decision-making.  These tools were designed to complement and enhance, not replace, existing claims processes and procedures, as well as to provide Claim Dept management with measurable data to track and audit Claim Professionals’ activity, and to identify high performers.  This article will describe the tools in greater detail.