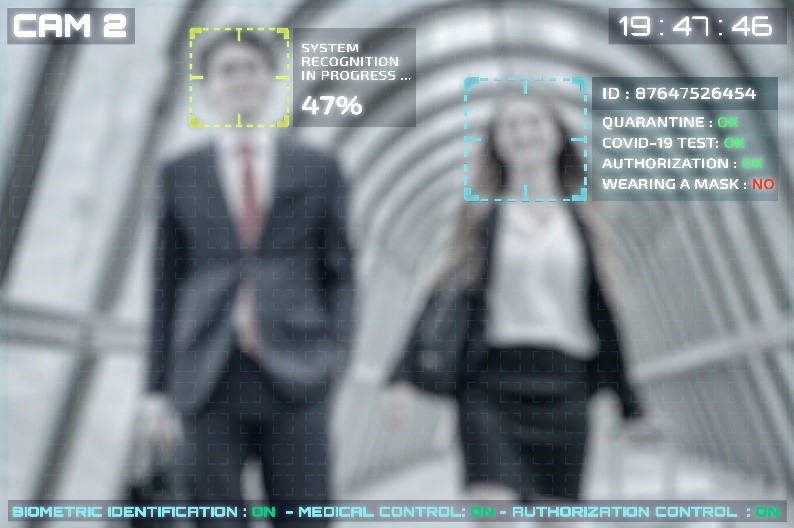 Facial recognition software uses a person’s unique facial features to verify identity in a digital image. Artificial intelligence then scans new images for a match with those already stored. In short, the technology works through pattern recognition. Amazon is piloting facial recognition software sold under the brand name, “Rekognition.”[i]  According to Amazon, it can identify people, objects, text, scenes and activities in real-time by instantaneously searching pre-loaded databases of images.

A second company, Clearview AI, developed a facial recognition app that allows a user to take a picture of a person and then upload it to see other public photos of that person. The app provides links to the sources, such as Facebook, YouTube and other websites. Clearview is reported to have stockpiled in its database 3 billion photos from the Internet. [ii] Clearview’s founder, HoanTon-That, states that his company only uses publicly available images in its facial recognition technology. However, CNN reported that Clearview may retain photos in its database even after a user deletes them from the original platform or makes a social media account private.[iii]  It is predicted that this app will eventually be available to the public for individual use.

Facial recognition technology is already making its way into the public entity space. It has been reported that the FBI is piloting Amazon’s software. [iv]  Law enforcement agencies in Oregon, Orlando and Chicago are also reportedly using forms of recognition software. [v]  In February of 2020, the Lockport City School District became the first known school district in New York and one of the first in the nation to adopt facial recognition technology.[vi] Two other private schools in Washington State have followed suit. [vii]

A paramount reason for any public entity’s interest in this technology is safety.

Some administrators see this as another tool to use in the ongoing effort to stop school shootings and reduce the number of sexual assaults. Using facial recognition, a school can set up alerts to monitor who enters the school, such as when a non-student, expelled student or registered sex offender is on the premises. A police force that uses the technology can identify suspects more quickly and easily. Amazon’s site contains published reviews of its software from many customers, including Chris Adzima, an Information Systems Analyst with the Washington County Sheriff’s Office, who states:

“Amazon Rekognition has greatly increased the ability of our law enforcement officers to act quickly and decisively. We were able to index more than 300,000 photo records within 1-2 days, and the identification time of suspects went from 2-3 days down to minutes. Within one week of going live, the solution built on Rekognition identified a suspect for a cold case that led to an arrest through due process.” [viii]

Those critical of the technology cite privacy concerns. A school using facial recognition, for example, could monitor its students, creating a type of surveillance state. With such overreaching, school administrators would be able to track students throughout their day. The software can monitor a student’s location within the building, as well as which students associate with each other, further eroding privacy. Another issue is the accuracy of the technology and the possible implications of errors. Facial recognition tends to have greater inaccuracy when identifying women and persons of color. Several civil rights groups, including the ACLU, have voiced concerns. In a May 2018 letter to Amazon CEO Jeff Bezos, the ACLU joined with 34 other organizations expressing their concerns over the software and the potential for its abuse.[ix] The letter called upon Amazon to stop selling the program to law enforcement because it could lead to the expansion of surveillance of vulnerable communities and others. The ACLU raised questions centered on accuracy, privacy and whether this technology violates citizens’ rights, including instances of wrongful identification.

There have been two recent landmark lawsuits involving facial recognition.

Given the arguments on both sides, this technology remains on a collision course with privacy rights. We anticipate a vigorous debate on both sides as the use of facial recognition software becomes more widespread. We will continue to monitor the advances in this technology as well as the litigation, which may ensue.  If you want to continue the conversation on Facial Recognition, please give us a call.

Steve Leone is a Vice President & Unit Manager within the Genesis Public Entity Claim Division. He has 30 years of multi-line claim experience. He and his team handle public entity reinsurance pools and individual risks as well as K-12 and higher ed accounts nationwide. He may be reached at 203.328.6637 or steve.leone@gumc.com

Jessica Stewart is a Second Vice President within the Genesis Public Entity Claim Division. She has 17 years of experience in the insurance industry, first as an insurance defense litigation attorney and now as a Claims Executive.  She works out of the Chicago office and can be reached at 312.267.8526 or jessica.stewart@gumc.com